[BioStar 2] How to Upgrade BioStar 2 Server

BioStar 2 supports a direct upgrade from the 2.5v to the latest version.

If your BioStar 2 version is 2.5v or higher, you can download the latest version and conduct an upgrade.

However, you cannot upgrade from a very old version such as 2.0 to 2.4 in one upgrade because that process is unsupported.
Please refer to this article to upgrade sequentially.

- When you delete BioStar 2, it will delete the MariaDB database as well.

- If you're upgrading from BioStar 2.5 to BioStar 2.6, please refer to the following article to take note of the license policy changes.

BioStar 2's database has gone through a few changes since its release.

The AC database started with the SQLite Database, and in version 2.2.1, the MariaDB T&A database was released.

Refer to the image below to see the changes in the Database in BioStar 2 versions.

If you are using any DB Link program with the SQLite database in BioStar 2.2.1 or below, you will have to make changes in the software to make it compatible with Maria DB.

Always back up your database before deleting or upgrading BioStar 2.
You can find instructions at the following link:

Maria DB: How to Back Up and Restore the Database

If you're upgrading from BioStar 2.5 to BioStar 2.6, please refer to the following article to note the license policy changes.

- If you want to upgrade BioStar 2.8 version, you must start upgrading from 2.6.0. Otherwise, the upgrading will be unavailable.

- You cannot switch from a Maria DB Database to an MS SQL Database and vice versa with an upgrade. You can only upgrade MS SQL to MS SQL and Maria DB to Maria DB version of BioStar 2.

- If you used the BioStar 2 cloud feature before, you will have to turn on the feature again after the upgrade (starting in BioStar 2.4 and above).

- Make sure to back up the language properties file if you're using a custom language. It will be deleted on the upgrade and will have to be pasted again.

Note: Use the temporary link if the main link fails

You can always find the most recent BioStar 2 at the following link: BioStar 2 Download Page. 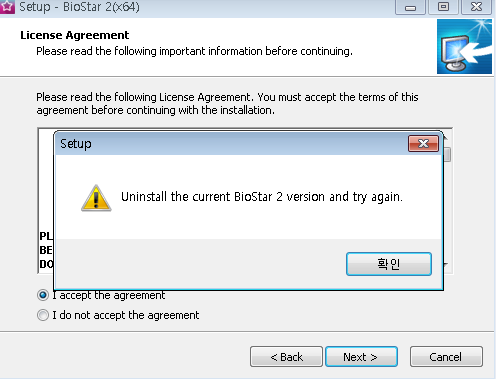 DO NOT uninstall BioStar 2 before backing up BioStar 2's database. If you did the express install previously, deleting BioStar 2 will also delete the database.

1. Back up BioStar 2 database.

Your Chrome browser may keep the cache of your old version of BioStar.
In such cases, you will see many menus that are missing or some menus that appear to have special symbols out of place.

In such cases, follow the method below to clean the Chrome browser’s cache.