Below are some answers to frequently asked Wiegand Configuration questions

Prox and iClass cards are Wiegand cards so if you have a device support this type of card read, it will read Wiegand cards.

BioStar 2 supports the following formats based on the cards below. 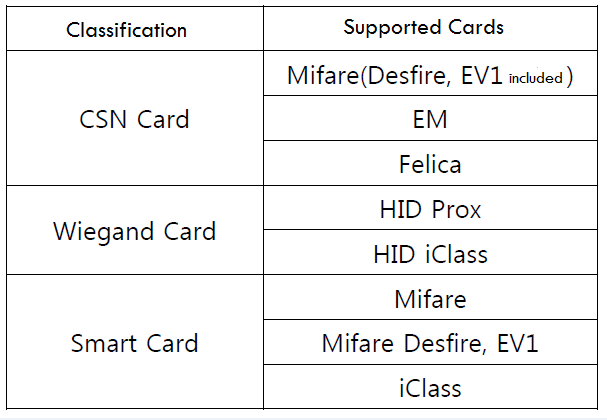 Refer to the following article for device comparison

[BioStar 2] Supported Card and Card Formats based on Model Type

With CSN cards you still have the option to read CSN as Wiegand.

Why are some of my device not showing the Wiegand configuration option?

With devices that read CSN cards you will see the UI below:

With devices that read Wiegand cards you will see the following UI:

With devices that support multiple card types that include both CSN and Wiegand cards, you will see both configuration options as below:

Where should I configure my wiegand configuration?

a. Finger/Face only + Wiegand Output

In this case you will authenticate with finger only and send Wiegand output to 3rd party controller on authentication success.

In this case you will only have to configure the Wiegand output in the Advanced menu of the device.

In this scenario the Suprema device will read Wiegand cards and send Wiegand output to 3rd party controller.

Configure the device Wiegand read format on the Authentication menu of the device.

Also configure the Wiegand output in the Advanced menu of the device.

* only supported with A2, FaceStation 2, BioStation 2

In this scenario simultaneous both input and output Wiegand ports will be utilized. It means you will receive Wiegand card input from a third party device, then read user finger/face, then send out Wiegand output on authentication success to a third party controller.

Refer to the Simultaneous use of Wiegand In & Out article in our knowledgebase for detailed instructions.

Can I use legacy mode in BioStar 2?

Legacy Mode (One Device Mode) is supported with BioStar 2.6 and above. Refer to the following article to understand what the concept is:

I configured one device mode but its not working as expected. What did I miss?

Check if your device firmware is up to date. The latest features are supported with the latest firmware.

CoreStation and entry devices do not support one device mode. You can refer to the configuration guide on our knowledgebase.

Why can't I enroll with CSN anymore with Prox and iClass devices after BioStar 2.2.1?

Up to BioStar 2.2.1 users were able to register HID Prox cards as CSN cards (Enroll CSN).

However from BioStar 2.3 and above, you can only enroll as Wiegand cards because that was the originally intended concept of BioStar 2.

Refer to the article below for details:

[BioStar 2] CSN Wiegand Cards in BioStar 2.3 and Above

How can I configure the same Wiegand format in BioStar 2 which I configured in Biostar 1?

Refer to the article below to understand the difference in the UI.

Can the Wiegand input and output port of A2, BioStation 2, FaceStation 2 be used at the same time?

Yes, in BioStar 2.6 and above. Refer to the Simultaneous use of Wiegand In & Out article in our knowledgebase for detailed instructions.