Please check the below and keep using the latest version of BioStar 2.

1. Added visual face to the dashboard.

Visual Face is for the user face credential of FaceStation F2.

Face is for the user face credential of FaceStation 2.

4. Deleted the option to use user ID as card ID from Enroll QR/Barcode page. 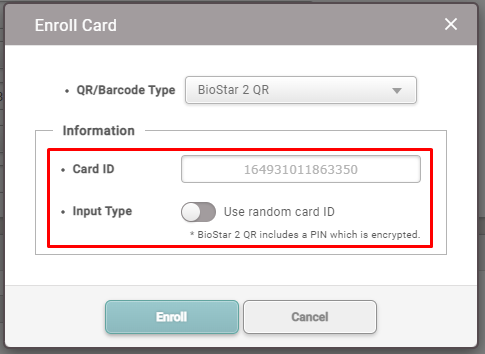 5. Improved sharpness by changing the image size of the QR/barcode when issuing BioStar 2 QR.

8. Added logic to check that AC, TA, VE services do not use the same DB name during custom installation.

9. Changed the version of Chrome included when installing BioStar 2 to 75.

12. Updated to inquire the correct result value by checking the schema name, when the same table name exists in the TA and VE databases during database encryption/decryption.

18. Improved so as not send to the portal when the user's phone number is out of the allowable range of the Airfob Portal when issuing a mobile access.

19. Added procedure to accept to collection and use of the privacy when using cloud.

20. Added 'All Devices' option to dual authentication setting to door. 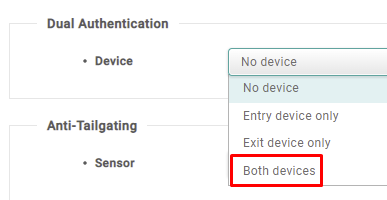 21. Improved the occupancy limit zone monitoring page to adjust to the screen resolution of the monitoring device.

24. Added the Use QR as card option. (Relevant Article)

26. Amended to include user name in data when sending user data to devices without LCD screens.

2. Description of the photo value of POST/api/users was incorrectly written as binaryDatas (Affects version: v2.7.12).

3. Last authentication record of a user was not displayed when searching for long-term idle users for more than 6 months (Affects version: v2.5.0).

4. Although FaceStation 2 supports the option to select whether to use the screensaver from firmware version 1.5.0 or later, the option is displayed on the details page of devices with an earlier version (Affects version: v2.8.10).

5. Name of the operation level set in Georgian displayed as a question mark in the audit trail menu (Affects version: v2.7.6).

7. In an environment using MS SQL Server database, If the Output Module (OM-120), a slave device of CoreStation, was deleted, the device list was not queried (Affects version: v2.8.12).

10. When a user is deleted from Manage Users in Device, other information in the synchronization table was also deleted and synchronization failed (Affects version: v2.4.0).

12. Target of the audit trail was output in the format of 'eventType.number' when alert setting changed (Affects version: v2.8.9).

15. If the relay was not set, user could not create a door, but the previously added door was saved without setting the relay (Affects version: v2.5.0).

20. When synchronizing added users on the device, the user group was not counted (Affects version: v2.0).

21. Anti-passback violation alarm occured even for normal authentication when a device configured as an anti-passback zone under the following conditions was duplicated as a muster zone.

22. When setting the home screen logo and slideshow of the device, image was not resized to match the resolution of the device screen, causing the screen to look distorted (Affects version: v2.6.0).

23. When using Personal Information DB Encryption, if user information was edited in Active Directory and then synchronized, the changes were not synchronized (Affects version: v2.8.0).

24. When setting alarms in muster zones and interlock zones, if the number of devices was large, the entire device list was displayed on the add alarm screen (Affects version: v2.6.0).

25. When the language is set to Japanese, if the event log was exported as a CSV file, the text in the file was output in English (Affects version: v2.8.9).

26. If the administrator clicked 'OK' when the device was disconnected while entering the device detail page, an irrelevant error message was displayed (Affects version: v2.7.10).

27. Error message not displayed when adding doors that exceeds the number supported by the license (Affects version: v2.8.3).

28. When updating user information using the API, an 'E-mail already exists' message was returned if the same email was maintained (Affects version: v2.0.1).

30. Symbols could be entered through API even though it does not support the use of symbols when entering department and title in user information (Affects version: v2.8.9).

37. T&A related settings were displayed on the details page of devices that do not support T&A (Affects version: v2.8.14).